Andrew Lloyd Webber's globally-celebrated musical Jesus Christ Superstar celebrates its 50th anniversary this year! The beloved show, which follows the gospels from the point-of-view of Judas Escariot, comes to Cadillac Palace Theatre on Saturday 30th July 2022 (Rescheduled from Saturday 25th September 2021)! With music by Lloyd Webber and lyrics by Tim Rice, Jesus Christ Superstar is an engaging and lively rock opera with incredible hits such as “Superstar,” “I Don’t Know How to Love Him” and “Gethsemane,” and the special 50th anniversary production is simply heavenly! 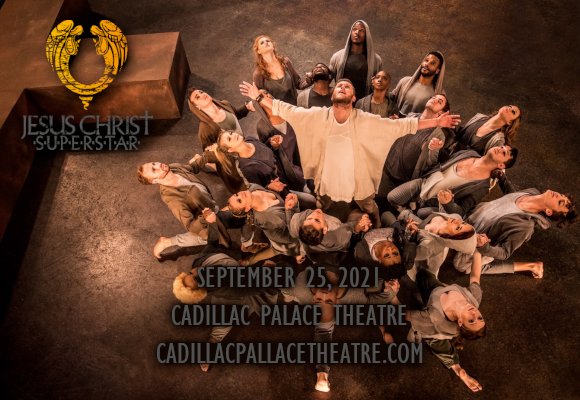 “This is not your grandmother’s ‘Superstar.’ Drew McOnie’s choreography has the explosive feel of barely contained ecstasy, filled with flailing movements that evoke old time tent revivals where snake handlers spoke in tongues and miraculously cured the sick. Tom Scutt’s smoke-colored costumes give the piece a timeless feel, as does his towering, sleek, steel-and-scaffolding set. Stark and shadowy, lighting designer Lee Curan’s work is so rhythmic it almost feels like a part of the orchestra.” – Chicago Sun Times

“This ‘Superstar’ has a lush, glorious sound the likes of which you’ve never heard before.”– Chicago Sun Times

“A gorgeous, thrilling, heavenly musical. It might not qualify as a miracle, but with help from choreographer Drew McOnie, designer Tom Scutt and a first-rate cast, director Timothy Sheader is turning water into top quality wine with his revival of the Andrew Lloyd Webber and Tim Rice rock musical, originally released as a concept album.” – The Guardian

“Timothy Sheader’s adrenaline-pumping production of Andrew Lloyd Webber and Tim Rice’s “Jesus Christ Superstar” is ardently, honestly sincere. I haven’t had so much fun listening to Mr. Lloyd Webber’s score, his finest, and Mr. Rice’s lyrics, his cheekiest, since I bought the concept album as a teenager.” – New York Times